WHERE IT ALL BEGAN 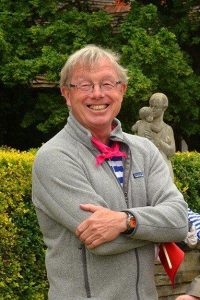 In 1996. Dr. Don McKenzie, a Professor in the Department of Sports Medicine and exercise physiologist, challenged the prevailing medical thinking that women treated for breast cancer should avoid rigorous upper body exercise for fear of developing lymphedema, a debilitating and chronic side effect of treatment.

He developed a program to determine the impact of exercise on breast cancer survivors, choosing dragon boat paddling as the epitome of strenuous, repetitive upper body exercise. He trained twenty-four breast cancer volunteers in a gym for three months, introduced them to dragon boats and taught them paddling techniques. At the end of the three-month season on the water none of the volunteers had lymphedema.

While Dr. McKenzie’s medical experiment/project was underway, the women found they were fitter, healthier and happier. They loved the camaraderie and support of their fellow paddlers and had regained control of their lives. They realized that dragon boat paddling could become a means to raise awareness of breast cancer and of the ability of survivors to lead normal lives. They named their team ‘Abreast In A Boat’ and invited other survivors to share their exciting experience.

Over the years, the movement progressed to other areas in Canada and was introduced to other countries by breast cancer survivors who saw the benefits. These inspirational individuals started communicating across the miles, providing much support and encouragement to see other survivors reap the benefit of dragon boating and the health and fitness benefits it provided. Special mention should be made also to the amazing awareness made to the public on breast cancer.

Since 1996, as more and more interest came about, representatives from different countries joined together to paddle in different places including Canada, Australia, Italy, Penang, New Zealand, Singapore, Poland and the United States. In 2005, a celebration of the start of Abreast In A Boat took place in Vancouver, Canada – an international event with over 2000 breast cancer survivors from around the world. Following this Festival, Australia hosted ‘Abreast in Australia’ in 2007. Further festivals followed in Peterborough, Canada in 2010, and more recently Sarasota, Florida U.S.A in 2014. Each festival provided breast cancer survivors with the opportunity to network, attend workshops, paddle and celebrate life! 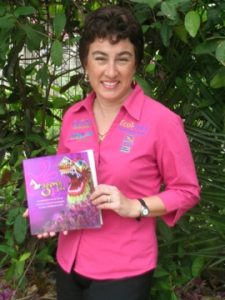 What has now become a national movement in Australia originated in the Northern Territory (NT). It started when a group of Territory women attended the First National Breast Cancer Conference for Women held in Canberra in October 1998.  Michelle Hanton OAM – the founder of Dragons Abreast, attended this conference.  As part of one of the presentations, a Canadian speaker (Sharon Batt) happened to mention that breast cancer survivors in Canada paddled dragon boats. Michelle knew that dragon boats had just started in the NT because in her professional life she provided racing uniforms for the newly formed NT team. Inspired, Michelle returned to Darwin determined to round up a group of paddlers!

Michelle contacted Abreast In A Boat and this was the start of a wonderful friendship along with great advice on how to go about establishing a dragon boat team.

In December 1998, the first survivor paddlers took to the water at a fun day hosted by Dragon Boat NT. They were filmed by SBS Television for a program called Tutti and had their first taste of media fame as this program was shown around South East Asia. The ACT followed in early 1999 with Anna Wellings-Booth then Brisbane in the same year with Janelle Gamble.  From a small beginning at Lake Alexander in the NT, the appeal is such that the movement has spread across Australia to include every State and Territory. 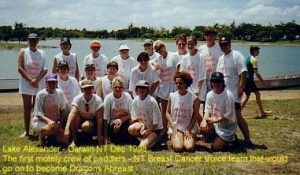